Thanksgiving! The 4 of us Americans decided to share the day with some of the Belgians in our lives and introduce them to a proper Thanksgiving meal.

Our guests started arriving before we even did. Nothing was ready. The table wasn't set, food was still in the bags we carried them over in. We just told them that chaos was a part of the American Thanksgiving tradition, and they rolled up their sleeves and jumped in to help. We set the table, which included spreading miniature pumpkins and pumpkin seeds around the plates. Center pieces are not something I would normally call essential for Thanksgiving, but there is some switch that flips on when you are celebrating an American holiday outside of America that makes these details non-negotiable :)

We went easy on them for appetizers. Spiced wine was served alongside a tray of typical snacks- stuffed olives and peppers. We did however shake it up with the Tabasco jalapeno jelly.... I wish you could have seen their faces when I poured the jar out over a nice big brick of cream cheese. We needed someone to break the ice for sure. I called Clay over to try some on a cracker and also be the official taste-tester of the group. All it took was a first taste and they were hooked.

Amy made a pumpkin soup the get things rolling, and then we cleared the plates to get ready for the main course. Only...

The huge rooster we had prepared wasn't cooked through. Awesome.

We turned the bird over to Sam and Nathalie who are way more experienced. 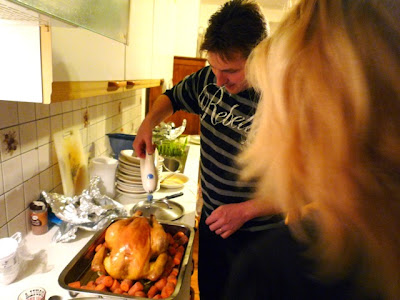 While we got the rest of the meal table-ready, Clay entertained some of our guests. I love this picture because you can tell by Clay's face he is speaking French. The guy is so belge. It cracks me up. I also like all of their faces. We get looked at like this a lot :) 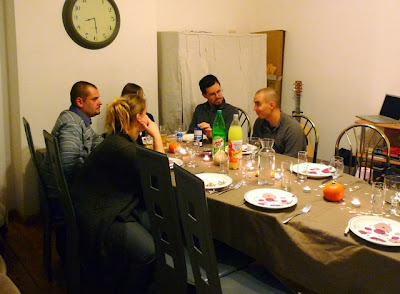 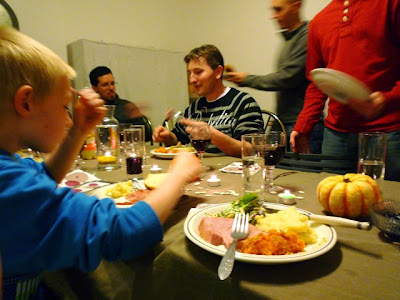 The bounty: Ham, stuffing, salad, beer bread, mashed potatoes, sweet potatoes, and a rooster that was still in the oven. 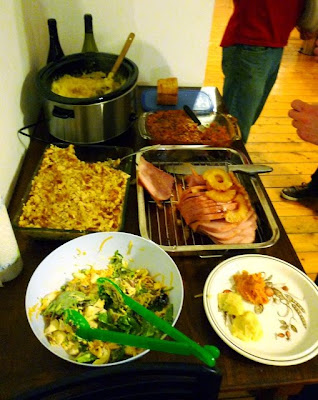 They loved the ham. The sweet potatoes had them all scratching their heads, though. The whole concept of something sweet mixed with the main meal is pretty uncommon here. Oh and the cranberry sauce had me laughing. I bought some in a jar at our grocery store, but when I went to put it in bowls I realized it was really just jelly. So we ate straight up jelly with our meal. You can blame us if you ever come across a Belgian that claims to be "just like the Americans" by eating jelly with a fork. Yeah, that one's on us.

Dessert was apple pie, brownies (Betty Crocker, a true treat), and ice cream (Blue Bell wouldn't ship so we settled for the local brand.... it sufficed). Pumpkin pie isn't something that has gone over well in the past so we decided to abstain this year. You have to pick your battles.

It was so special sharing one of our traditions with people that have been sharing theirs with us for the past 2 years. 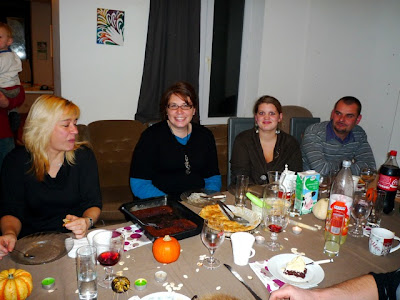 Another thing that had me laughing was the pumpkins. There was this one particular mini pumpkin that I was saving to take home. I had grand plans of making the world's smallest jack o lantern. It was going to be awesome.

Which pumpkin do you think Anthony chose to destroy by fire? 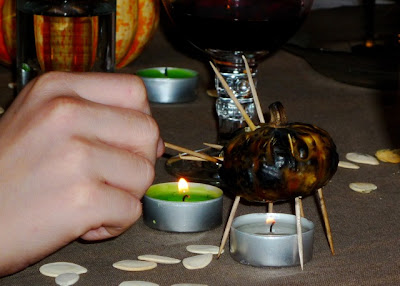 When I saw it I couldn't stop laughing. He reminded me of that creepy neighbor kid in the first Toy Story that mutilated all those toys. Boys.

This week looks to be a slower one. Lots of video work to keep us inside, which is great considering the snow that's been coming down.

This was the view out of our kitchen window yesterday around 5pm (yes, FIVE! It gets dark so early!). The flakes had just started sticking to rooftops. 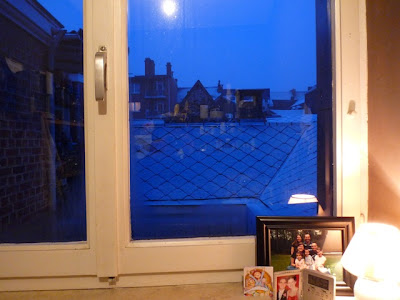 And this is the sight that greeted us when we woke up. 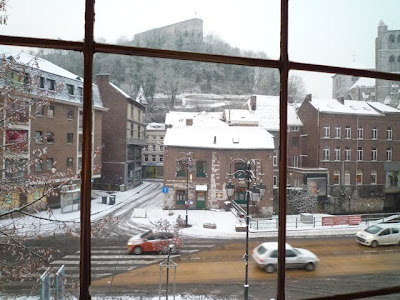 Time to pull out the thick socks, boots, and those fabulous jeans that are huge enough to accommodate an extra layer of long-johns underneath.

The up-side is that it's gorgeous. I wonder if snow will ever get old? Years of Houston winters has me loving it!
Posted by Clay and Megan at 9:19 AM 2 comments:

Guess where we were the last few days: 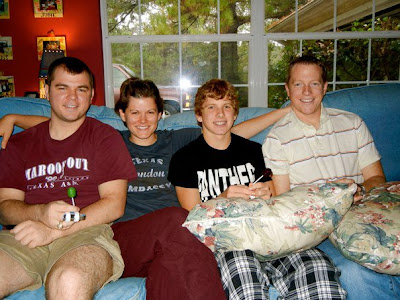 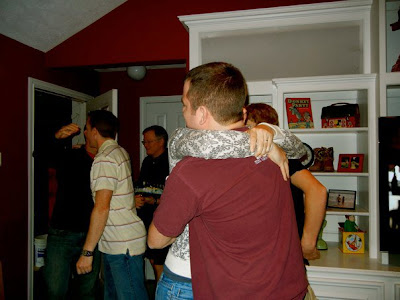 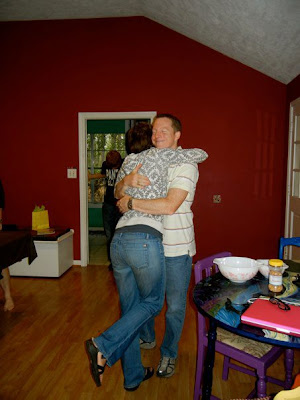 It was a quick trip home in between our flights from Latin America to Belgium.

And it was perfect.

We were able to spend close to 24 hours with each family. After such a long video/photography trip, I was ready to put the camera down, but I snagged a few of Mom's pictures that make me smile.

As usual, the Pasches were laughing together from pretty much the moment we walked in the door. Gma had brought down some jeans she had found in her closet from the 8os. It was so good to be together and laugh! (how were zippers ever so long??) 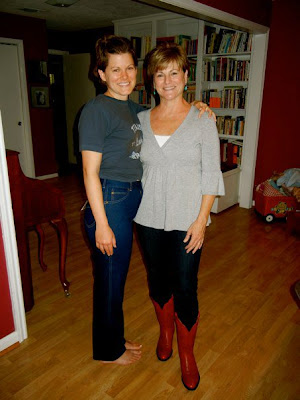 Of course most of the time was spent like this. LOTS to talk about! 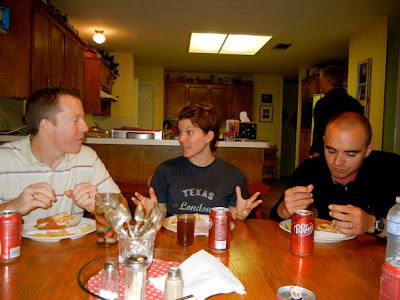 Gma made her meatloaf on Wed. night and it felt like Christmas all being at her house. 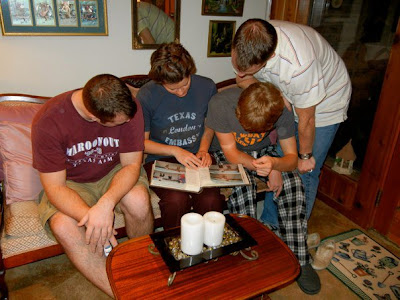 I for one am happy to finally see one of these Gma-dining-room-shots with ME in them! :) Mom even gave us all a Christmas present just to take advantage of it feeling like a holiday. 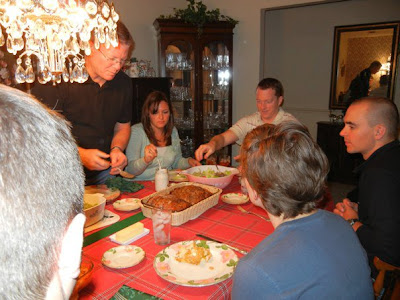 You really can't beat this. We flew out at 6am on Thursday morning and arrived back in Belgium today.

As the train from the airport got closer and closer to Huy, we were just so happy. To have completed our month-long video trip well, to have snagged 2 incredible bonus days with our family, and to then be traveling closer and closer to our little apartment and more importantly our BED, which we were pretty ready to fall into by that point. 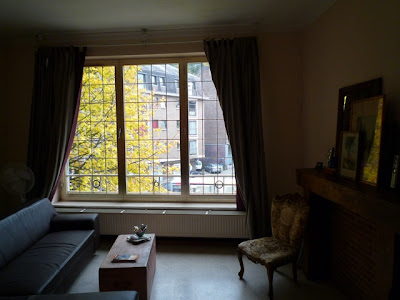 And the leaves are changing! Huy had such a pretty welcome ready for us. 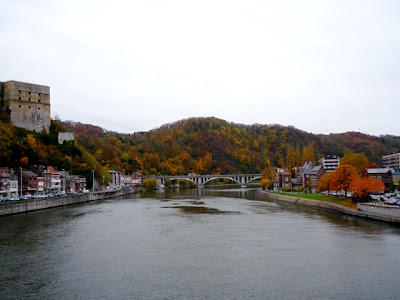 It is rainy and chilly outside, but we are warm in our sweet little home, nestled down deep into our cozy burrow of dirty laundry and unopened mail :)

It all feels really good.
Posted by Clay and Megan at 12:28 PM 4 comments: