The new year rang in.

We took turns poking our heads out of the rooftop windows to catch the city fireworks show. If you squint, you can see Prague Castle. 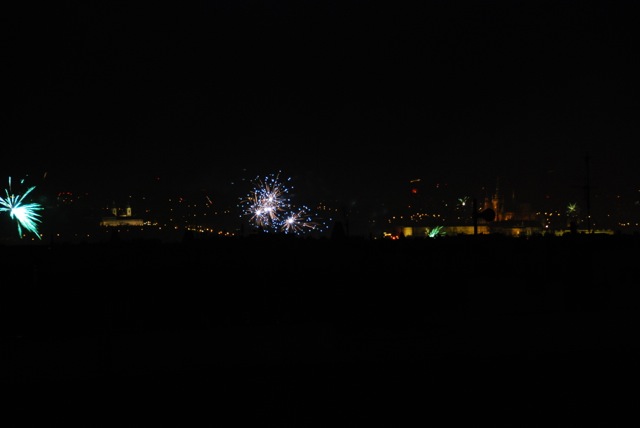 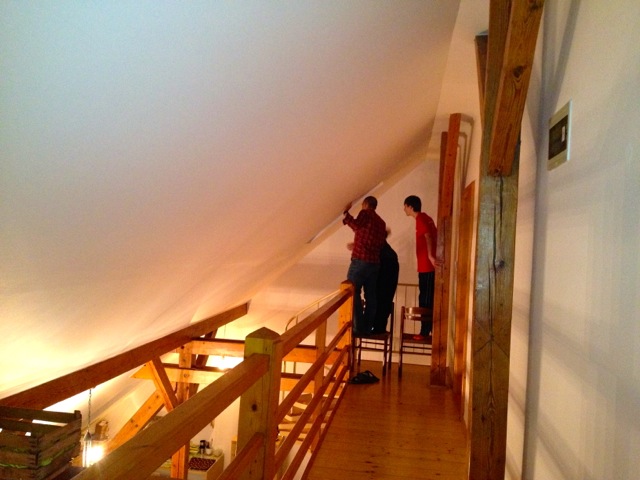 On New Year's day we had a few people over to eat soup and watch The Twilight Zone. It was a fun, relaxed day.

After a quick break, it was back to the books for me to prepare for my big semester exam.

With my little study helper, of course. 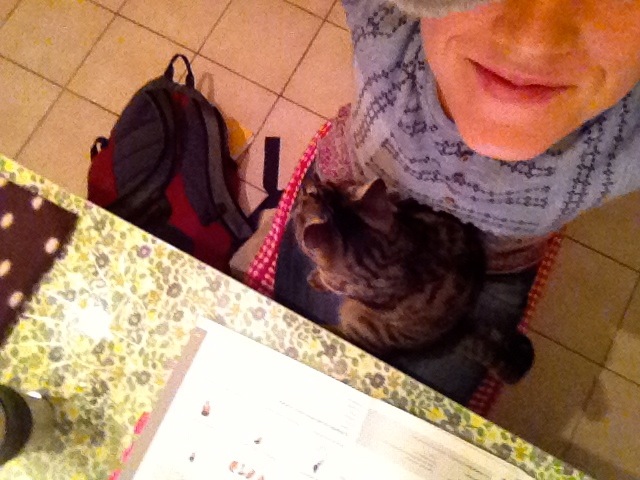 I also realized during this time that none of us had eaten pumpkin pie in 2012.

That can of Libbey's pumpkin puree I'd been saving came to the rescue. 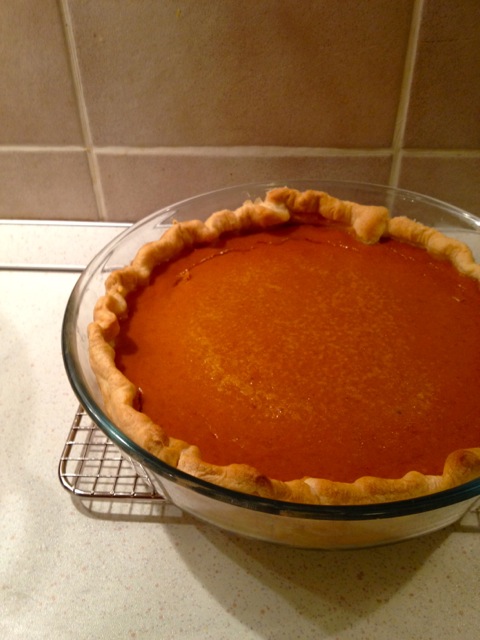 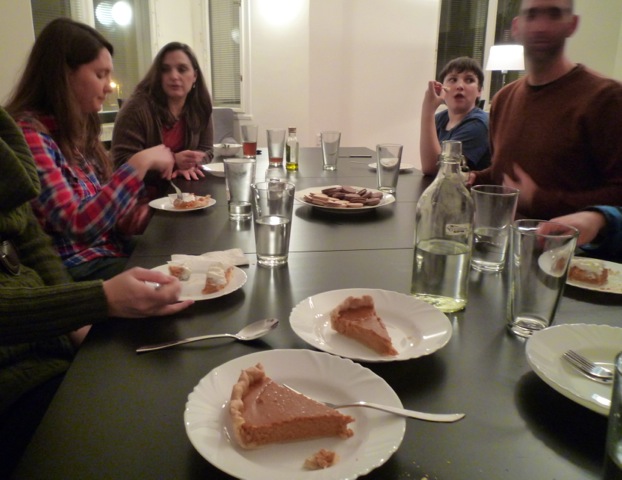 Our friend Cristina was in our class last semester, and her boyfriend Jirka is on the Czech national fencing team. They invited us to a tournament and it was so cool.

The tournament was cool.

Not me and Clay. 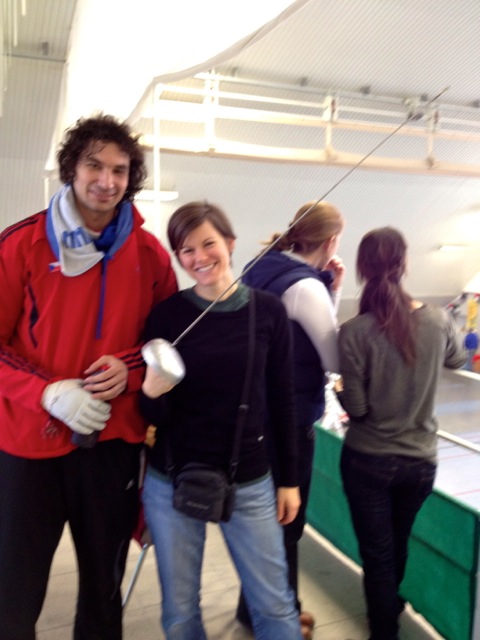 Give the two of us a sword, and we just can't help ourselves. 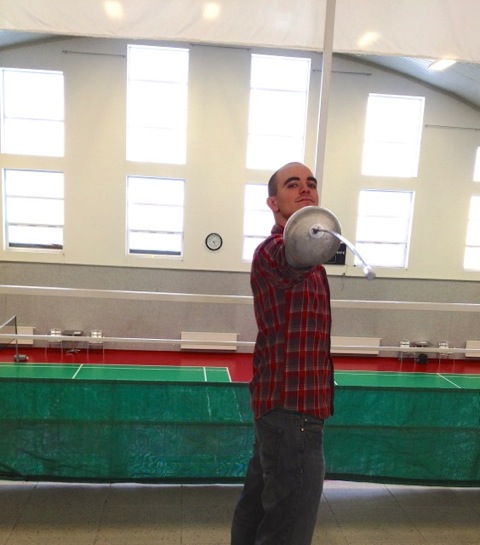 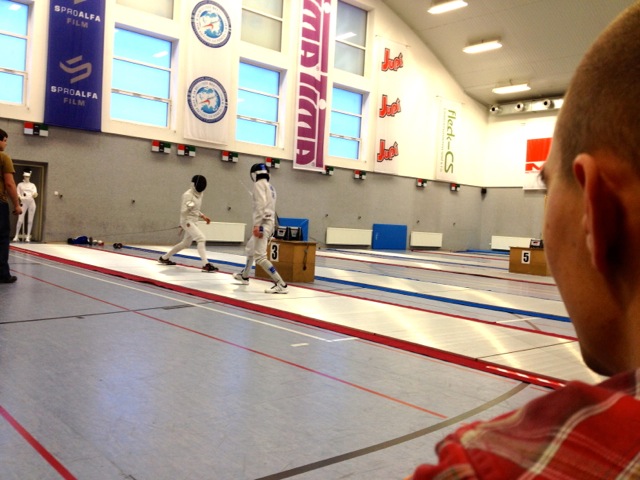 The next day Marek and Ewelina invited us go cross country skiing.

So off to the mountains we went! 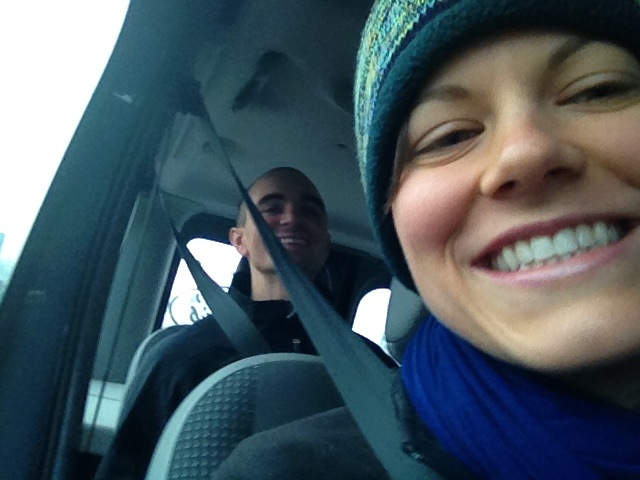 This photo makes me look so much sportier than I am. 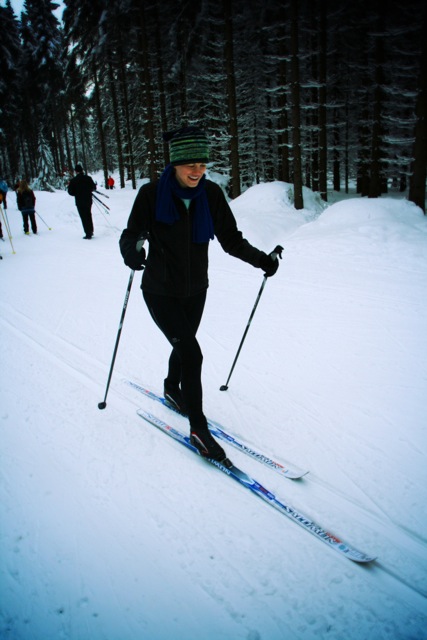 And yes, you get to wear tiny little spandex pants when you cross country ski.

And stop at chalets for tea and soup in between trails.

Notice how effortlessly Clay is climbing this hill after stopping at the chalet. 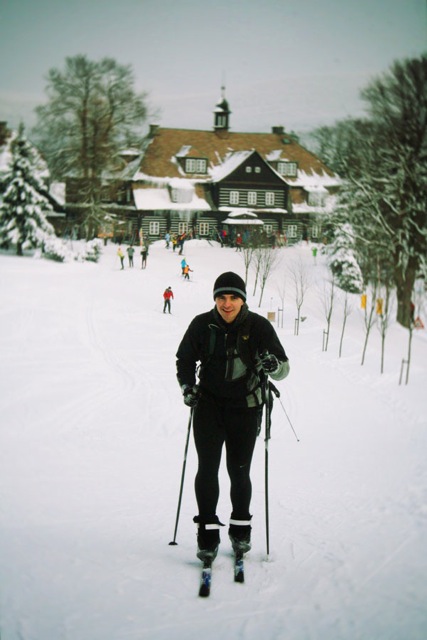 Now notice me, barely managing to not slide backwards.

At the point that this photo was taken, everyone else had made it up the hill and was watching my slow climb. I believe I was yelling "this is soooo haaaard!" to which they responded by taking this picture. 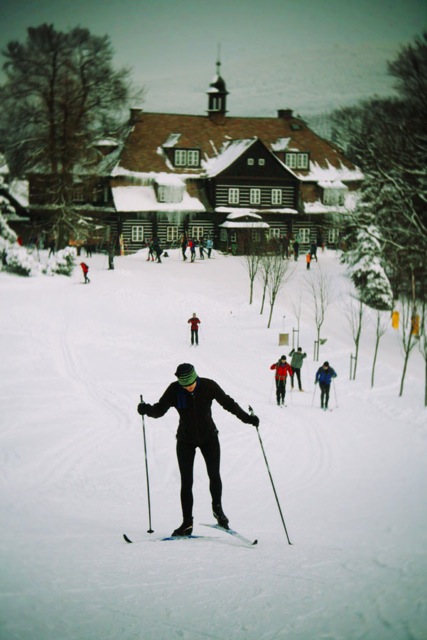 It was a really fun day. Cross country allows for a group to stick together and talk the whole time, which was a new thing compared to downhill skiing.

Everyone was very patient with us as we learned.

Marek and I *may* have made a train a few times when the hills got to be too much for me.

And a Czech guy *may* have passed us calling out that his grandmother used to pull him around like a train when he was a kid.

Our group: Clay, frozen-faced me, Ewelina, Lee, Filipo, and Marek 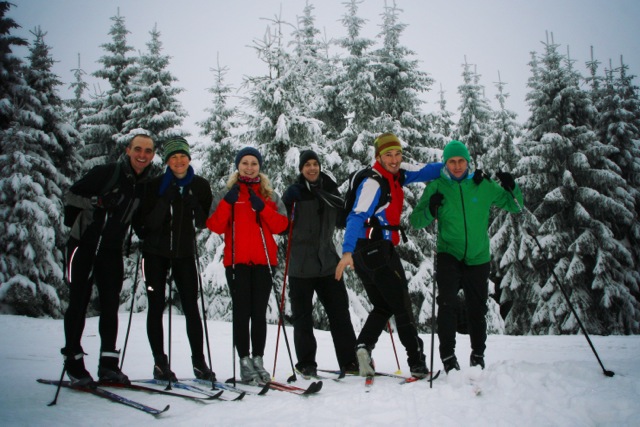 We celebrated our survival with a traditional Czech meal.

On the way home, Marek drove and we all sat in the back of the van talking and laughing like kids on a family road-trip. 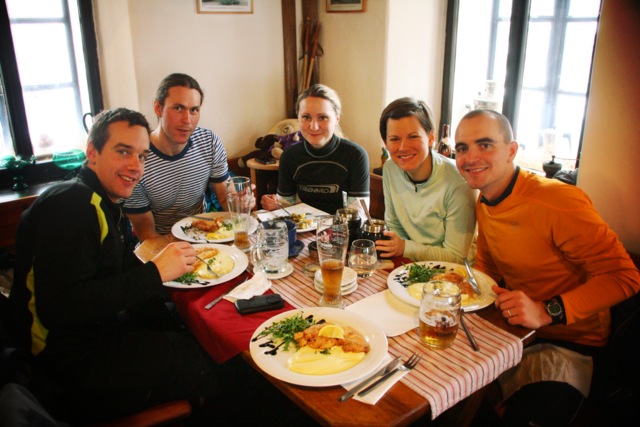 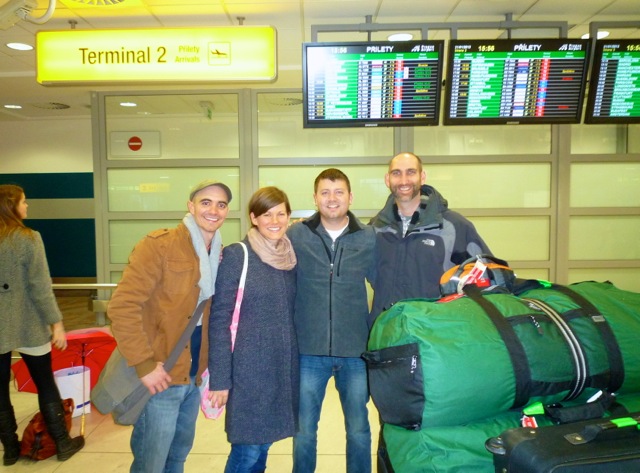 Jordan will be working with us for the next two years and we are so excited he is here!

One of the main reasons we chose to move to Prague after Belgium was the opportunity to work alongside these 2-year folks. God did such amazing things in our lives during our two years in Belgium that we wanted to be a part of others' experience. Jordan's arrival is the realization of that dream.

We are pretty excited. 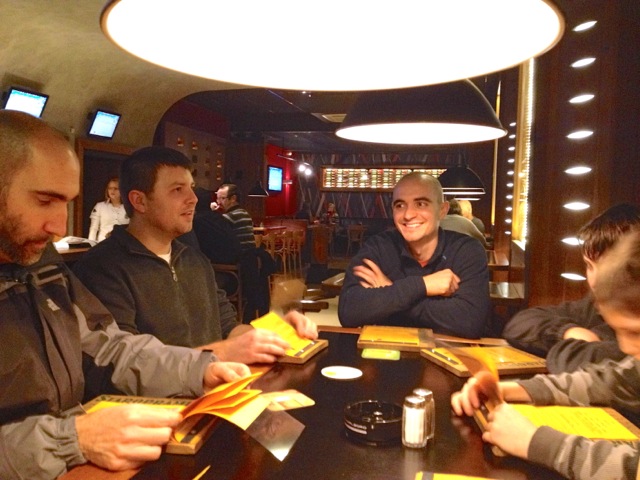 The boys are pretty excited too. Jordan's staying with them until he finds an apartment and they just think that's too fun.

Keith and Rachel went out last week for Rachel's birthday, and the boys hung out here for some youtube videos and indoor marshmallow-roasting.

Rachel and I are pretty outnumbered at the moment, but we love it :) 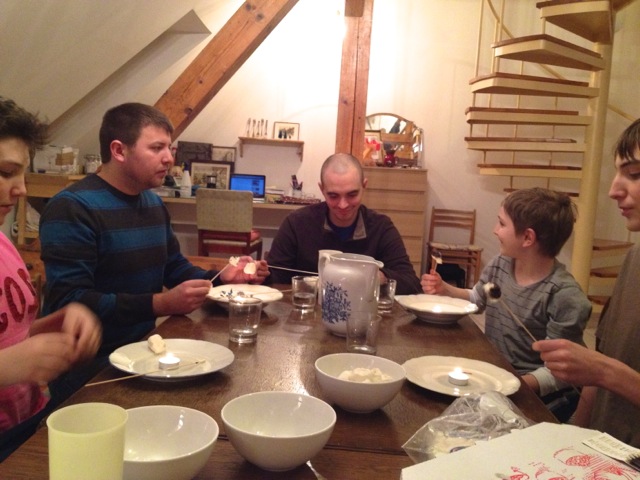 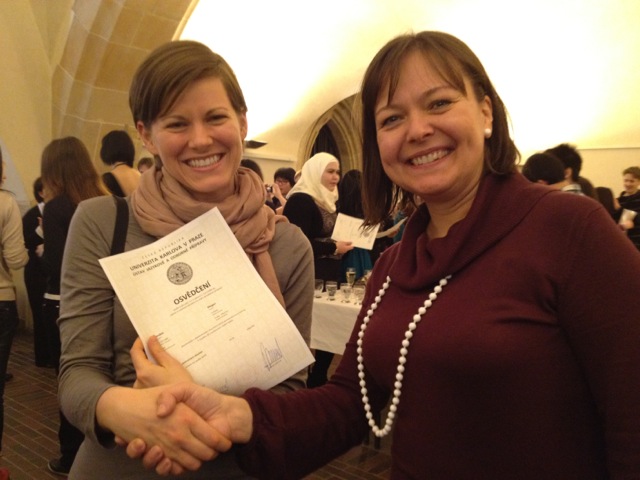 And by graduated I mean my semester class is finished.

There is an international language scale called the "Common European Framework of Reference for Languages." It ranges from A1-C2, and according to the written and oral exams recently completed, I am currently at an A2 level, moving on to work on level B1. You can read about the scale and what each level means here.

What it means to me is that this last year has been filled with intense language study. Czech is a tough one. Compared to the Spanish and French we have learned, Czech is just so MASSIVE. The framework and rules seem endless. But we are learning. We are chipping away day by day. And we are improving little by little. I am pleased with A2 and will keep working.

Of course, I am going to miss these people. 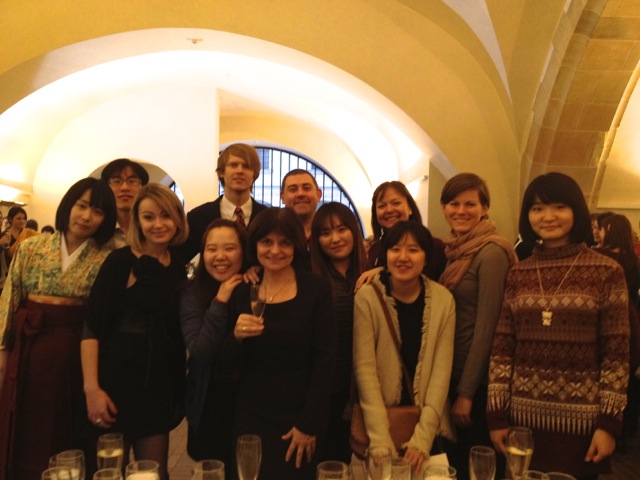 Man, I am so sad to see the semester go. 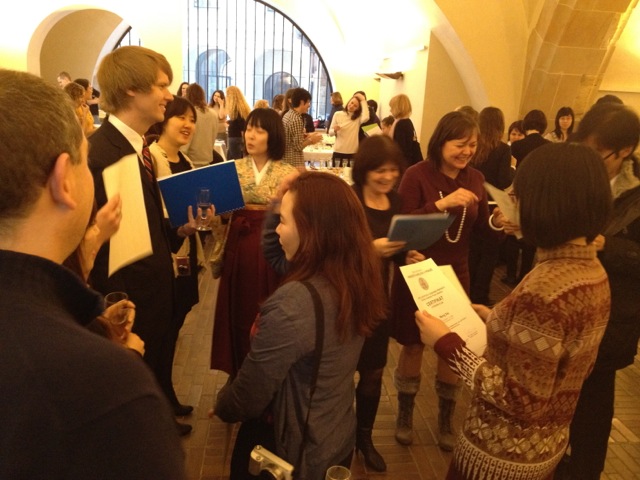 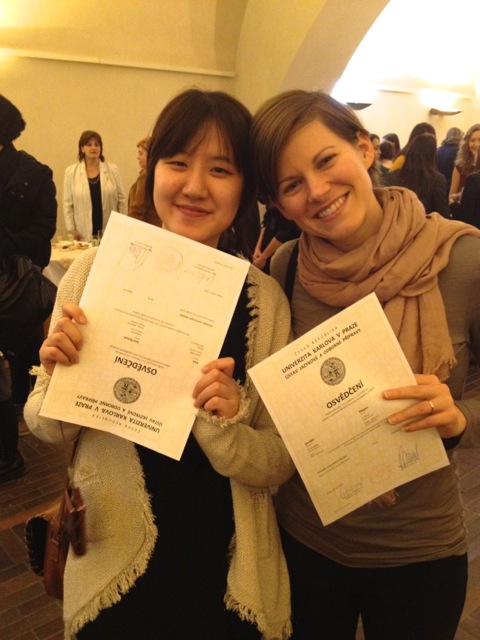 I was crying when I took this picture. These people are delights. Each and every one of them. 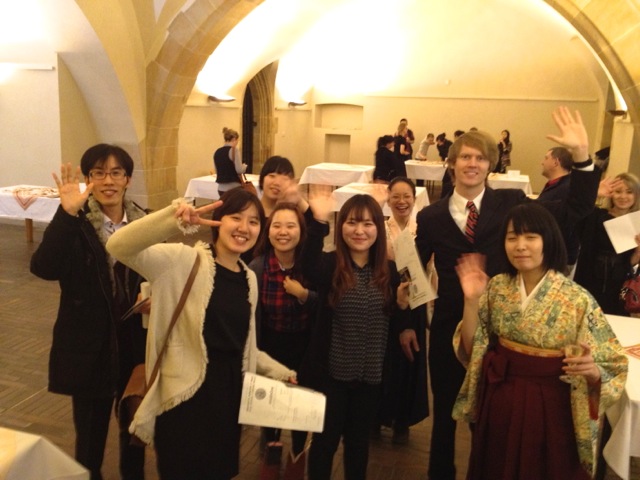 And then today, Monday.

Back to business as usual. 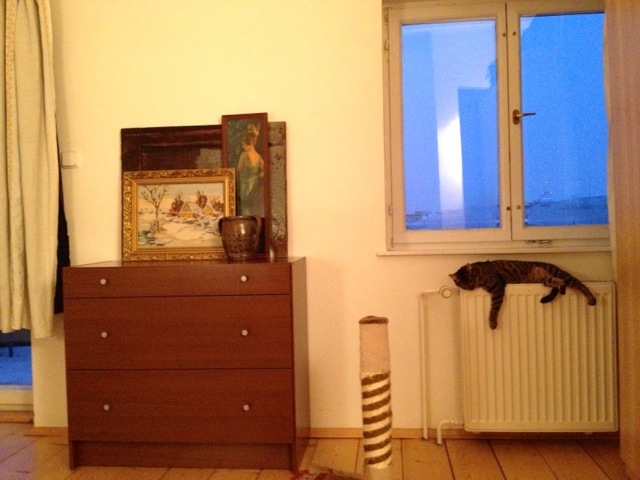 Similar routine, different schools. I'll be studying through a group of different language companies this semester. I'm going to focus on speaking which makes my palms sweaty, but I am going for it!

So. January. It was busy and full and fun and a little sad. A good month.
Posted by Clay and Megan at 1:50 PM 1 comment: